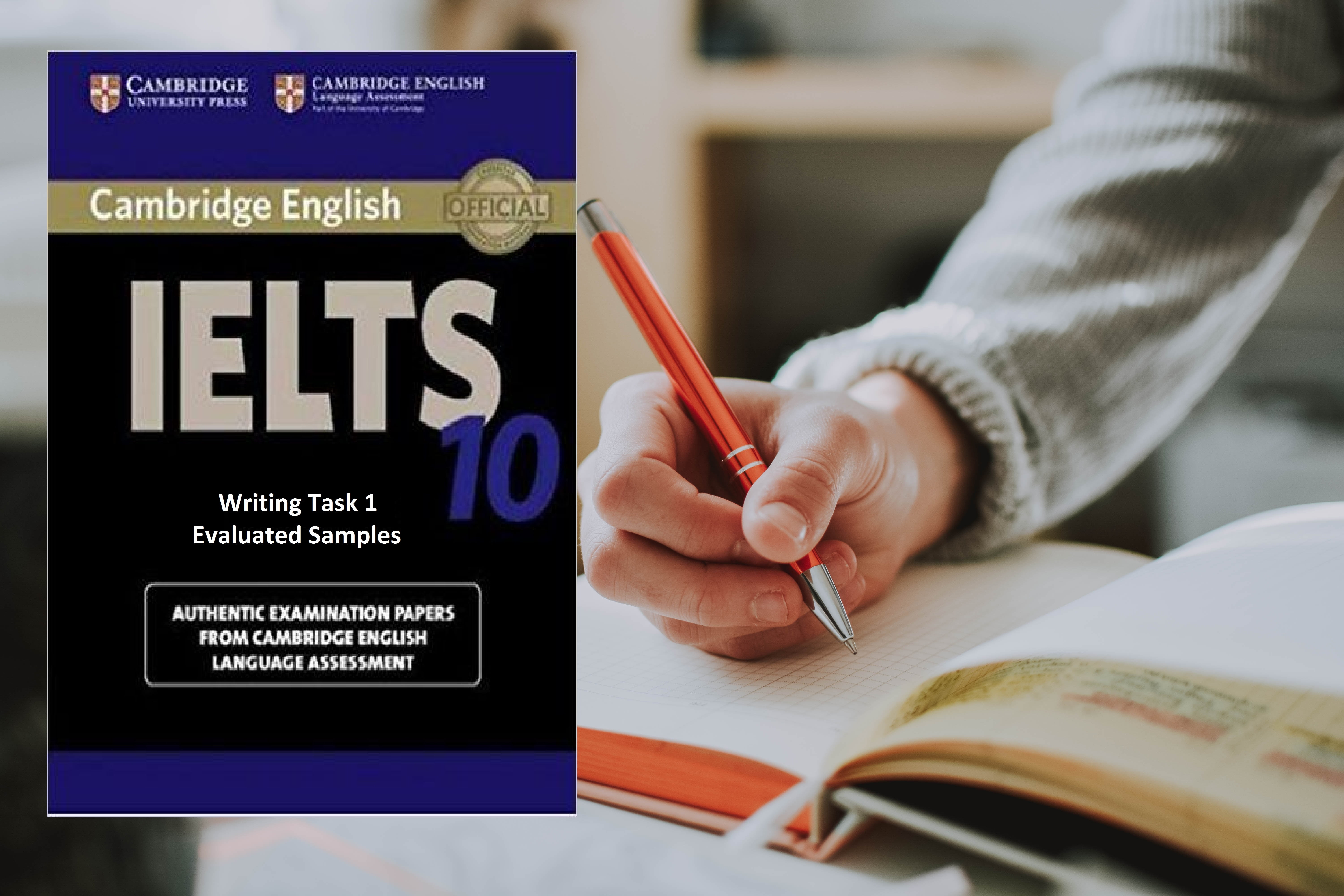 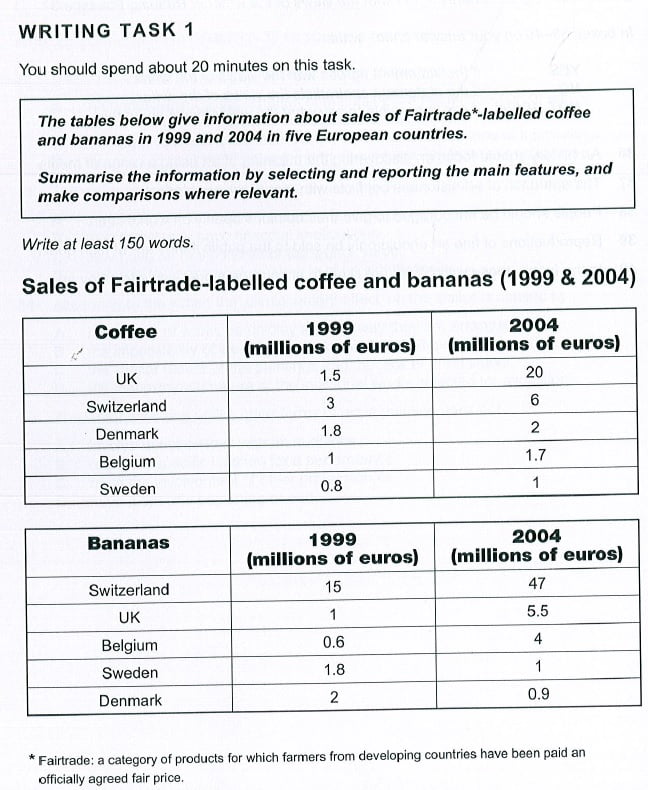 The tabels below give information about sales of Fairtrade-labelled coffee and bananas in 1999 and 2004 in five European countries. Summarise the information by selecting and reporting the main features, and make comparisons where relevant.

The tables given show the amount of money (in euro) coming from trades of coffee and bananas under a label of Fairtrade in five different countries of Europe in 1999 and 2004. Overall, as is observed, the amount of revenue from two products in all countries swelled except the profits from bananas in Sweden and Denmark.

Moving to the trades of bananas, the UK had a significant jump from 1 to 5.5 million as did Belgium from 0.6 million (the lowest) to 4 million which is twice more than that of Denmark in 1999, that halved in 2004. Similarly, Sweden, having a profit of three times higher than that of Belgium in 1999, almost halved in 2004. By marked contrast, neither of countries had an increase as Switzerland did; its revenue, being 15 million in 1999, almost tripled, hitting all-time high in 2004.

Task Achievement:  I would start by saying ” Tables show” rather than ” The tables given show”. There is good comparison of data. I would suggest you to highlight more main features of the tables.  (6)

Coherence and Cohesion: It’s not cleared that you have finished writing task 1. You can use linking words to further improve the coherence and cohesion. You can use words like ¨In the end of the given period¨, this will show that you are going to end your report.  (8)

Lexical Resource: In your task there is certainly variety and a range of vocabulary. (7)

Grammatical Range and Accuracy:  This section can be improved using articles.  (7) 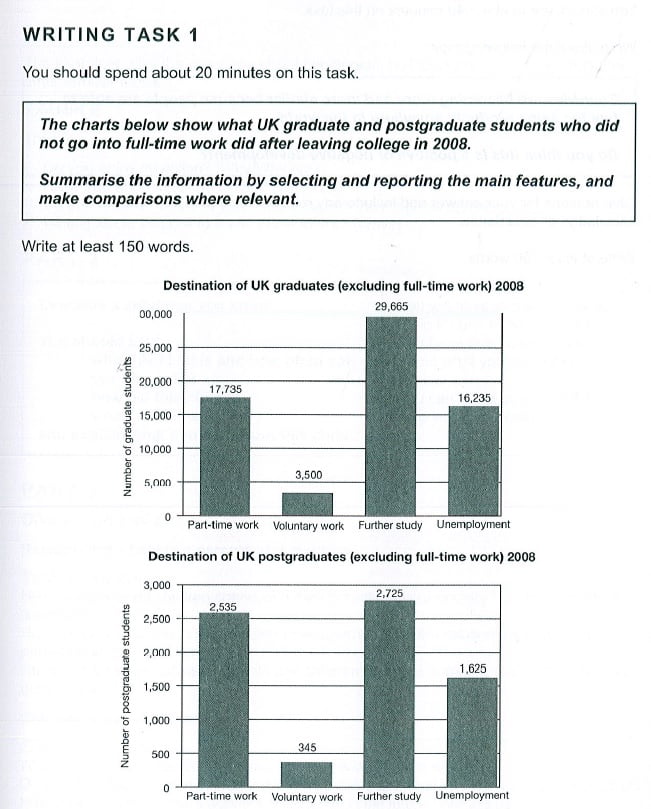 The charts below show what UK graduate and post graduate students who did not into full time work did after leaving college in 2008.
Summarize the information by selecting and reporting the main features, and make comparisons where relevant.

The provided bar charts show the number of graduate degree holder and highly educated people, who did not work for full time after their college in United Kingdom in specific year.

Overall trend of getting higher education was observe in both graduates as well as post graduates. While working part time was second most common practice seen among students.

It is clear that ratio of graduate students were more as compare to post graduates. Bachelor degree holders, with almost dominant rate of 30 million students used to study for their post graduation degree. However, very significant number of students i.e. around 17 millions worked part time. Contrary to that 16,235 students were jobless in year 2008 after graduation, while less number i.e. just 35 thousand worked without salary.

Percentage of post graduate students were one third of total graduate adults. But those students were also keen to gain more knowledge and a prominent portion of students started study for PhD and so on, except less than 400 students. While 2535 of them did part time job after their university. Half of the number were remain unemployed whereas, only 345 students work without pay.

In conclusion, it is seen that urge of getting education remained popular in both group of students.

Task Achievement:  In introduction, you have used term ‘’Highly educated people’ which is an opinion so be careful. Opinions are not required in IELTS writing task 1. According to me, you didn’t highlight the major features of the chart fully.  You can further improve the task achievement section.  (5)

Coherence and Cohesion: You have used inappropriate words choice for organizing report. (6)

Lexical Resource: Some word form is frequent in your task. As you used ‘while’ three times. (5)

Grammatical Range and Accuracy:  If I talk about your Grammatical Range, it is simple and there is an error in every sentence. Grammar in particular is holding you back. (4) 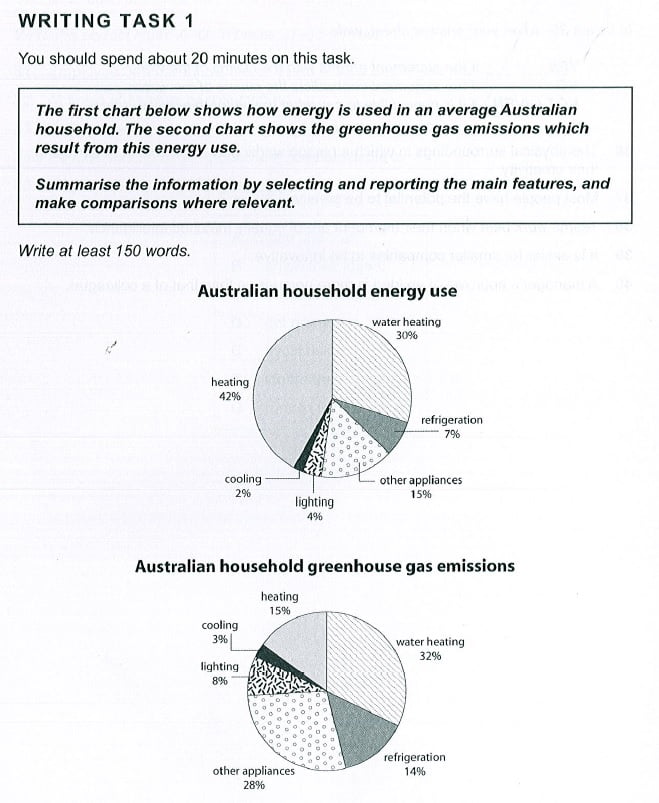 The first chart below shows how energy is used in an average Australian household. The second chart shows the greenhouse gas emissions which result from this energy use.

The first pie chart illustrates the average Australian domestic energy consumption by heating,water heating,cooling,lightning,refrigeration and other appliances.The second pie chart demonstrates the greenhouse gas emissions resulting from utilization of above mentioned household.Overall,it is clear that significant proportion of energy is utilized by heating.Moreover gas released by heating is maximum.

According to pie chart,overall,heating makes up two third of total energy consumption with almost half of energy utilized by heating about 42% followed by water heating about 30%.Other appliances contribute to 15%.The energy used by refrigeration is about 7%.However,cooling and lightning share small percentages about 2% and 4% respectively.

The pie chart reveals that water heating emits 32% gas figures almost similar to its utilization.However,other appliances release 28% gas approximately double compared to its use.It is clear that small fraction of gas emitted about 15% compared to its maximum utilization about 42%.However,double the amount of gas emission is noted by refrigeration that is 14% while only 7% is used.Similarly by lightning 8% is released while only half about 4% is utilized.Only a minute proportion of gas is emitted by cooling about 3%.

Task Achievement:  Why you are using overall twice?  There is no proper comparison of data. you have given overall view in introduction, but what is purpose of again saying overall. The main features between the 2 pie charts could be explained and related more clearly. (5)

Coherence and Cohesion:  You repeated some words multiple times that makes your task weak.  You didn’t use any closing words so the reader can know that you have finished your report. (5)

Lexical Resource: Many words are repeated in your task which are limiting vocabulary. consumption, used, proportion, utilize and compared more than six words were repeated.  You are missing an opportunity to use a greater range of vocabulary. (6)

Grammatical Range and Accuracy:  For grammar, I would recommend you to work on articles. It’s a pity that you don’t use comparative/superlative grammar structures (6)